As time and data collection proceeds, I guess I need to look into examples for the design project as well. Found サスティナビリティの意匠的検討に基づく集合住宅設計 by 山田匠。I contains most of the sustainable design projects presented in the SD review magazine. He divided them into the following:

wunderground map – link to past data, will collect this

1. After gather average max temp b/w 6月 and 9月 of last year, pick the hottest and coolest areas from the list and work inwards

Why max temp represents the hottest hour, ergo the the ttime of the day when the max amount of heat energy is stored within the buildings, hence radiating max energy hence having max temp.
2. Check for the hottest day in the past year in tokyo and set that as the simulation setting
3. Create 560m (approx 1km2) radius models of each of those areas, working inwards simulate.
4. NEEDs to be circular
5. Analysis will depend on comparing
CEP – HIP – PHF – DID/Volume

6. try and prove that even when wind is taken intoaccount you need to build high density tall areas in order to reduce HIP and PHF. The only reason that high dense environments have been shown to not be good for heat island are because (菅沼）the heat has a hard time escaping. Why circular? how does it help to have a cicular model instead of square??

This thesis used weather information from two sources. アメダス(by the Japan Metereological Agency) and Weather Underground (www.wunderground.com) by an American agency. Problem with アメダス is that it doesn’t have enough locations with data, even within the 23 wards of Tokyo it has about 21 stations. Weather Underground on the other hand seems to have a lot more locations currently, maybe because of the increase of stations bought after this particular thesis was done

For tomorrow, take all the weather spots in the 23区area and put them in an excel sheet. Collect the following information:

Too huge, but the analytical space is limited to only 300m around the weather station
Cant really deal with heights and form of the city block. As shown before, in (res1) almost all countermeasures refer to change in surface material. But these measures are fairly impractical. We need a countermeasure that can be implemented through FORM.

Too specific to location, deals purely with changing or improving material
Such studies become too location specific, but try and employ countermeasures that are at the scale of remote sensing?? Why?

Need 東京温度分布, will make one based on netatmo data. And pick the top 20 locations 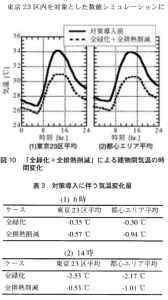 Easier to get basic Data and Model

Hard to get data

CAD Mapper to get areas 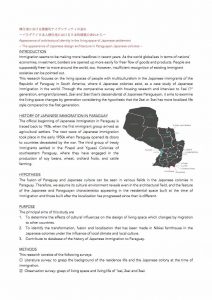 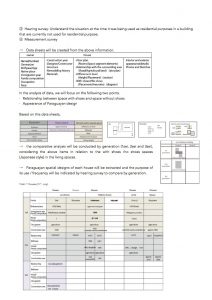 Background:
Urban Heat Island (UHI) and Heat Island Potential (HIP)
HIP was a calculation introduced by Mr. Hoyano of Tokyo University of Technology which gives us a macro view of the degree of the heat island effect. All the “heat emitting factors” listed above are considered and the surface temperatures of all the outward facing surfaces is calculated (meshes). The temperature difference between the surfaces (each mesh) and the atmospheric temperature is then simulated and then divided by the projected plane area of the city block. This gives a basic idea of the degree of urban heat island effect or in this case as its appropriate name, Heat Island Potential. The Formula is as given below. Note: This software can also simulate and calculate MRT, but as it is not used in this thesis, it will not be explained in further detail. Fig 1, Fig 2, Fig 3 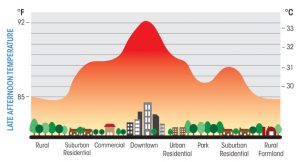 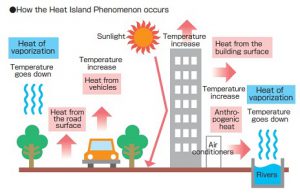 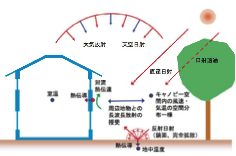 Data:
Create Preliminary Urban Models (systematic not compositional).
Run them through “Prevailing Wind Simulations”
Since it is extremely hard to take in account “Transient Wind Flow” and “Transient Heat Flow” during the simulation. Run the simulations initially for only Improvement of wind flow itself (Which include the variables of (Vmag, P)). After we have settled on 3-4 major cases, we can start taking heat into account.

Definitions:
It is hard to define wind flow improvement when heat is not being taken into account in the preliminary phase of the testing. Therefore, there are a few options we have available.

Method 1:
Wind Tunnel Inlet and Outlet Wind Analysis. Analyze the pressure and wind speed at the inlet and outlet surfaces of the wind tunnel model.

Method 2:
Involves looking at the cumulative frequency graph of all the different colored pixels (which represent velocity magnitudes) and determine a broader definition for the how well the ventilation has improved.

Reading suggested by Sakaushi Sensei:
Investigations in the Collective Form, Fumihiko Maki Fig 10
Which is subdivided into 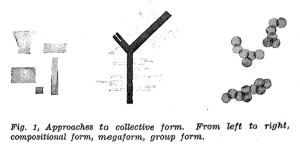 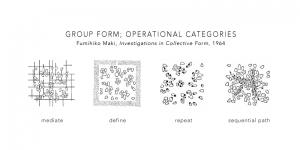 Current Issues:
What scale to design at?

This will dictate the entire future process of this thesis/design, which software to use, and what kind of conclusion to derive.

Title: The Role of Complex Systems Analysis in Architectural Design/Theory, Creativity and Emergence.

What kind of effect did social/digital media have on Architectural design?
Democratization of architecture. The construction process as well as design process transformed from a professional to a DIY/hobbyist culture.  This can be explained by due to 2 major reasons. ①  increase in availability of professional tools and construction materials, for e.g., “DIY CNC machines led to unit system based architecture” Alastair Parvin Figure1. Manual Labour->Manual Centralised->Mechanical Centralised->Digital Centralised>Digital-Distributed. ② change from object/product oriented design to process oriented design. Instead of attaching value to the final product, people have started attaching value to the memory and the flow of the entire building process.

Both above reasons have economic, environmental backgrounds. ① shows that as the industrial revolution moves onto machine production, the cost and availability of resources reduces. ② Shows that as things get cheaper they get so cheap,, that businesses don’t profit, so the only way to increase the economic value of a product is to appeal to the consumer/customers emotional side. This is very similar to what Don Norman says in his book, the design of Everyday Things, “good design is invisible, bad design in noticeable”. Opposites working against each other.  This brings me to an important epiphany, the thesis’s, especially in design have been focused too much on action and consequence, stimulus and response but in a very LINEAR WAY.

Architectural design is complex and situated cognitive of information to generate a solution for a given problem. A Creative Architectural Design means the introduction of new variables that change a common design model or structure thought the emergence of unexpected design structures. A lot of critical analysts of architecture including Kenneth Frampton and Adrian Forty have linked this creative process to the change in construction techniques and economics respectively. However, this begs the question as to why designers come up with wildly unique designs for the same given problem. Objective analysis of these ideals is a new field wherein the design process is looked at from a “Complex Systems” perspective. Say for example, in the study of the Geometrical “Emergence” are analysed.

One of the first architects to propose such an approach was Christopher Alexander in his book, “notes on the synthesis of form”. It is then important to understand how forms are synthesized as currently it stands to be a very subjective method of processing. Creativity needs an objective definition especially in field like architecture which deals with both science and the humanities.

There have been a lot of studies concluding to the fact that creativity, is a limited resource. However, with this thesis I would like to show the very opposite. It’s just that our understanding of creativity, especially with design is too linear. By understanding and employing the concept of “Emergence” I would like to show how creativity is not something that is planned but is a fallout product of the design process.

Plan for next week’s presentation:

If however the book does not arrive,

If employed data is unacceptable,

Search for new data, or create sufficient reasoning for employing the above-mentioned data

*Study on Geometrical Emergence in the Architectural Design of Le Corbusier, 日本建築学会大会学技術講演梗概集（東海）2012年9月 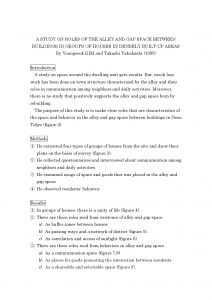 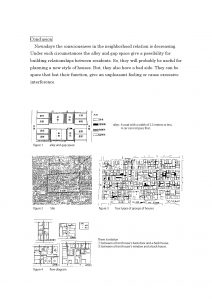 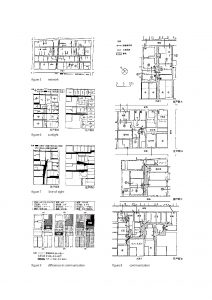 Comparison of Works by R.M. Schindler and R.J. Neutra in Southern California 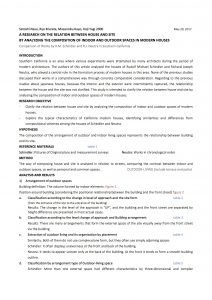 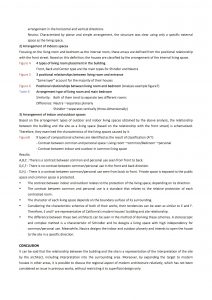